The #1 Place To Find Your Keto Recipes | Recipeketo.com

Home/Resources/How to Avoid Binge Eating ONCE AND FOR ALL – FAST !! 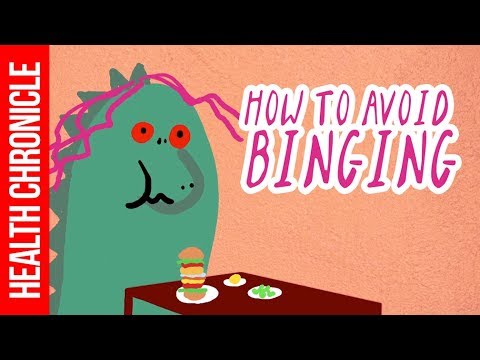 Animation by Health chronicle explaining how to avoid binge eating once and for all.

Why It is Important to Eat at Fixed Times Every Day

You can think of eating at certain, fixed times throughout the day as an insurance policy against the “crazy hunger monster.” You know the one – it seems to appear when you’re ravenous and start to bite everyone’s head off . . .literally.

Its eyes are red. It has matted hair and long, dirty claws. It takes no prisoners. Until it’s been fed, it can’t think, talk, or rationalize about anything. It’s kind of mean, even to the people it loves. Once it has some food in its belly, it retreats into the dark cave from which it first appeared. Often with its tale between its legs, shoulders slumped. The regret of being a tyrannous savage heavy on its mind. If this sounds like you, you could likely benefit from a more structured eating schedule.

Eating a bit, whenever you can grab some convenience food between appointments, or stuff a few calories in your body while you’re driving in your car, isn’t the best way to promote good digestion.

When we eat at fixed times throughout the day, we support a healthy metabolism, too. You know – the way our bodies take up nutrients and get rid of wastes. These fixed timings also help our hormones stay even, and promote digestive health.

Have you ever had a big meal late at night, only to discover the next morning it feels like it will take an act of Godly might to get you out of bed? That’s because our bodies follow the rules of nature for digestion, sleep, and repair. Between 12PM and 2PM our digestive enzymes and stomach acids are strongest. This allows us to digest what should be our biggest meal of the day – the breakfast and lunch we’ve eaten earlier in the day.

By the time we are getting ready to go to sleep at night – if we’re out drinking wine and stuffing heavy foods into our bodies, we’re going to feel heavy ourselves when we wake up the next day. That’s because between 11PM and 3AM, our bodies are trying to clean house. If we’ve stuffed a bunch of food and drink in ourselves late at night, the body must commit most of its energy to digesting that food – not getting rid of wastes that have accumulated from earlier in the day and the day before.

It’s also common to experience a need to eat more unhealthy foods throughout the day when we skip breakfast and just “snack” instead. Inevitably, we will end up eating more calories than we need to because our bodies don’t have the fuel they need. We also create hormones which tell us that we’re full when we eat consistent, healthy meals at fixed times – first thing in the morning, at about noon, and ideally no later than 7PM at night for the last meal of the day. This doesn’t mean you can never snack, but you’ll be less like the “crazy hunger monster,” if you eat consistently and always at the same time. You’ll also notice that you want need to snack as much, because you’re getting the nutrition you need when you need it. The “crazy hunger monster” can hibernate in its cave a while, and your friends and family might actually start to like you again.

Here at Recipe Keto we’re all about low carb and keto recipes. We’ve rounded up some of the best low-carb breakfast, dinner and side dish recipes that are higher in fat than protein, which can help you follow a keto diet plan.